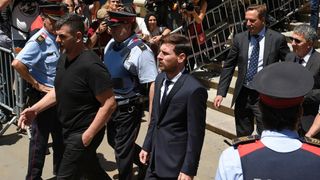 Barcelona star Lionel Messi has been sentenced to 21 months in prison after being found guilty of fiscal fraud.

The 29-year-old has also been given a €2million fine for three counts of tax fraud. His father has been handed the same prison sentence and a smaller fine of close to €1.7m.

Neither Messi nor his father is likely to spend any time in prison as any sentence of less than two years - for non-violent offences - can be served under probation, according to Spanish law. The pair can still appeal the decision.

Messi and his father were accused of defrauding Spanish authorities by failing to pay tax totalling €4.1million on image rights in 2007, 2008 and 2009.

It was claimed they used tax havens in Uruguay and Belize in order to conceal the true amount earned from those lucrative image deals.

Both men have always denied any wrongdoing, maintaining throughout the trial that Messi's father Jorge had control over his son's financial affairs, while the player was simply "worried about playing football".

Jorge had reasoned in court he lacked sufficient knowledge of tax protocol to orchestrate an attempt to defraud authorities, while his son said he never suspected any wrongdoing when his father asked him to sign contracts or documents.

The pair made a voluntary €5m "corrective payment" - equal to the alleged amount of unpaid tax plus interest - in August 2013.

The prison sentence was delayed for a two-year span after his legal team rejected the option to pay an additional fine of €280,000 instead, which they considered excessive.