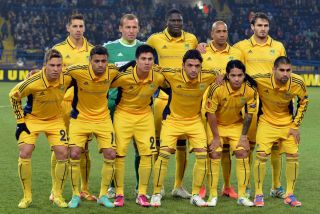 The Ukrainian side were thrown out of the UEFA Champions League and replaced by Greece's PAOK because of alleged links to match-fixing.

Metalist had been due to face Schalke in the next round of the competition but CAS confirmed on Friday that the ban would be upheld.

According to the body, UEFA, Metalist and PAOK all submitted responses after the Ukrainian club requested "a stay of the challenged decision and its reinstatement to the 2013-2014 UEFA competitions".

However, the organisation said in a statement: "After having considered the parties' submissions, the deputy president of the Appeals Arbitration Division decided to dismiss FC Metalist's request.

"Consequently, the UEFA decision remains in force, which means that FC Metalist Kharkiv is excluded from the 2013-2014 UEFA competitions."

Kharkiv reached the round of 32 in last season's UEFA Europa League before bowing out to Newcastle United 1-0 on aggregate.

They went on to finish second in the Ukrainian Premier League, qualifying for the Champions League as a result, and would have entered the group stage with a win against Schalke.