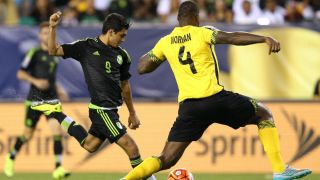 Jamaica coach Winfried Schafer conceded his team deserved to lose Sunday's CONCACAF Gold Cup final but was frustrated how the Caribbean nation handed goals to Mexico on a platter.

Mexico triumphed 3-1 in Philadelphia to claim their seventh title in the Gold Cup era and 10th CONCACAF championship overall, while Jamaica missed out on a maiden trophy in their first continental final.

Schafer, who insisted he was proud of his team, was left frustrated with how Mexico scored their three goals - particularly Jesus Corona's strike just after half-time, which the 65-year-old German coach claimed "was the goal that really killed us".

Mexico led 1-0 at the break thanks to Andres Guardado's volley, with Jamaica leaving the opposing captain unmarked at the back post, while Corona made it 2-0 in the 47th minute after stealing possession from Michael Hector just 25 yards from goal.

Oribe Peralta extended Mexico's lead further after Hector failed to clear a cross in the 61st minute, while Darren Mattocks pulled a goal back for Jamaica with 12 minutes remaining.

"They played great football in the first minutes and had chances; however, the mistakes we made were reflected in goals from Mexico."

Schafer added: "[Mexico] were better, stronger but congratulations to my team, everybody should be proud of them."