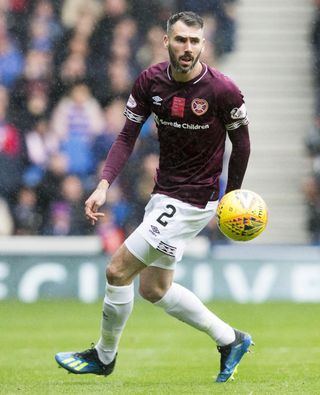 The Northern Ireland right-back has been moved into central defence in recent games following long-term injuries to John Souttar and Craig Halkett.

“He’s a good, experienced centre-half, played at the top level – internationally as well.

“He loves to go and challenge for the ball and I love to sweep up, so it’s quite a good partnership for us. I’m not sure where I’ll be playing this weekend, if I’m in there or on the right.

“Either way, I’m just happy to be in there and help the team.”

Hearts were thrashed 5-0 on their previous trip to the Tony Macaroni Arena and Smith is determined to ensure their supporters do not suffer again, especially after receiving strong backing during last weekend’s draw against Rangers.

“From the crowd on Sunday, I thought they were fantastic,” he said.

“They were right behind us from the word go, and I hope they come out on Saturday in their numbers and we owe them a better performance there this year.”