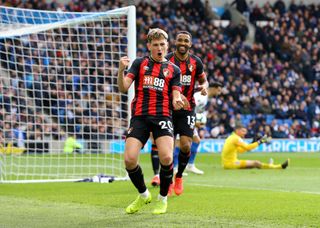 There are plenty of expensive Fantasy Premier League midfielders who could accrue points for your team as the season draws to a close, but what if you’re operating on a tight budget?

FPL managers will know that £5.1m doesn’t get you much in midfield, but Bournemouth’s David Brooks could prove the exception to the rule.

The 21-year-old Cherries midfielder has scored and assisted in strong numbers this season, but is he worth investing in for the final three games?

Bournemouth’s final fixtures of the season are Southampton (a) Tottenham (h) and Crystal Palace (a) – not the easiest set of games but certainly not the hardest either.

Taking into account Brooks’ average score in matches with the same difficulty rating (according to the FPL website) this season, the Wales international offers the best points per £m of any midfielder for the final three games at 2.66 points per million.

So while more established names like Sadio Mane and Son Heung-min might have a higher points projection going into the run-in, none are better value for their projected points than Brooks.

The official FPL website has developed specific measures which indicate how useful players might be to FPL managers, and one of those is Threat.

According to the FPL website, Threat is “a value that examines a player’s threat on goal,” which “gauges individuals most likely to score goals.”

Brooks leads the way for midfielders who cost no more than him who have at least as many appearances, his figure of 20.8 more than 33% higher than Junior Hoilett’s score.

With seven goals and five FPL assists so far, could Brooks close in on double figures for either as the season draws to a close?

If it’s assists you’re after, Brooks might not be the strongest contender in the category of cheap midfielders.

Creativity, according to the FPL website, “assesses player performance in terms of producing goalscoring opportunities for others” looking at passing and crossing.

Brooks falls to eighth in a list of midfielders who cost no more than him and have at least as many appearances, with a Creativity score of 15.5 compared to Robert Snodgrass’ 29.4.

With that in mind, does Brooks’ goal-scoring capability outweigh his poor projection for assists?