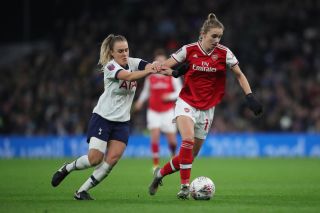 Vivianne Miedema has urged Arsenal to stage a Women‚Äôs Super League fixture at the Emirates Stadium.

But, whereas the reverse fixture took place at the Tottenham Hotspur Stadium, Arsenal will entertain their neighbours at Meadow Park ‚Äì the home of Boreham Wood.

A record-breaking WSL crowd of 38,262 fans saw Miedema score the second goal as the visitors won 2-0 back in November.

Stamford Bridge, the Etihad Stadium and Anfield have also hosted WSL games so far this season as the Football Association looks to build on the growth in interest in women‚Äôs fixtures.

But reigning champions Arsenal have so far resisted and Miedema, who has hit 40 goals in 42 WSL starts since joining from Bayern Munich in 2017, is keen to turn out at the Emirates Stadium at some point.

Asked by the PA news agency about the game at Spurs, Holland international Miedema replied: ‚ÄúObviously it was a massive day for women‚Äôs football.

‚ÄúSpurs organised it really well, it was an amazing game to play in, the stadium is amazing but the main thing for us is that we won at their ground and I picked up a goal as well ‚Äì it was a good day for us.

‚ÄúPlaying in a big stadium is nice but it isn‚Äôt something I get totally buzzed about but I do think for us as a club it would be the next step for us to play at the Emirates.

‚ÄúWhat a lot of clubs have done well this year is play a big game in their stadium and I hope that we do that too in the future.

‚ÄúLiverpool v Everton was at Anfield and this weekend it is at Goodison Park so I think that is really good steps.

‚ÄúIf there are 40,000 people coming to the game that is a massive thing and that would be good for us if we play a good game. Then people would come back to the stadium and it is one of the things we need to improve in the league, get more people to the game.‚Äù

Sunday‚Äôs meeting will be just the second WSL clash between Arsenal and Tottenham.

While Miedema‚Äôs goals were firing Arsenal to the title last season, Spurs were earning promotion to the top-flight for the first time.

‚ÄúI‚Äôm not going to say it (the women‚Äôs derby) is as big as on the men‚Äôs side but you know what the club is about so you are going to want to win this game extra because it is a club rivalry thing,‚Äù added Miedema.

‚ÄúEspecially the game we played in the Tottenham Stadium, you do feel that even for us. A lot of the people who came to the game instead of being neutrals were actually Arsenal fans and you do feel that.‚Äù