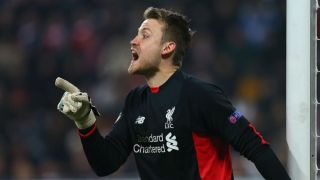 Simon Mignolet has welcomed the threat posed by new boy Loris Karius in the battle to be Liverpool number one and vowed to do all he can to retain the gloves.

Belgium goalkeeper Mignolet has been first choice at Anfield for the past three seasons, but has come under fire at times for a string of high-profile errors.

The arrival of Karius from Mainz for a reported £4.7million has raised the possibility of Mignolet being demoted to the bench by manager Jurgen Klopp next season.

But the former Sunderland keeper insists that competition for places can only be beneficial for the squad.

"I think the challenge is good," Mignolet told reporters after an open training session in California, where Liverpool are preparing for an International Champions Cup friendly against Chelsea.

"For every place you need that competition if you are going to improve as a player and as a team. I am used to the competition for places. It's happened over the last couple of seasons and it happened at the previous teams I was at.

"It is the same with the international team. If you want it, you have got to fight for it. You have got to take the challenge and ensure it gets the best out of you. It is nice to have.

"It all comes down to how you deal with it yourself. The biggest challenge is the fight you have on your own. You have to look at yourself and make sure you give your best in training and in your performances. That is what I will keep doing.

"There is no point looking at somebody else. You have just got to make sure you do your job in the best possible way."