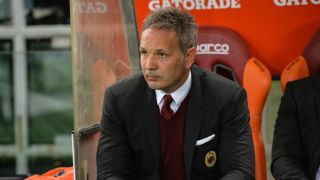 AC Milan coach Sinisa Mihajlovic thanked his players for their showing against Roma but believes they deserved more than a 1-1 draw.

Mihajlovic was under plenty of pressure going into Saturday's outing at the Stadio Olimpico following their midweek defeat to Bologna and saw his side fall behind to an Antonio Rudiger effort early on in the capital.

Reports suggested the Milan boss would have two games to save his job, and Mihajlovic's men found themselves level early in the second half through Juraj Kucka.

Kucka spurned a great chance to get the winner when he fired over from inside the box after the hour, while Giacomo Bonaventura rattled the crossbar with a strike from outside the area.

Mihajlovic felt Milan's display warranted the three points, telling Mediaset Premium: "I am happy, the team did well and we deserved more.

"I want to say that real men always get back on their feet and we finished this game with our heads held high. After a shaky first 10 minutes, we controlled the game and dominated the second half.

"We didn’t win because we were unlucky with Juraj Kucka and Carlos Bacca but we gave it everything and deserved to win.

"I thank the lads for putting in a great performance - this team deserves for people to have faith in them."