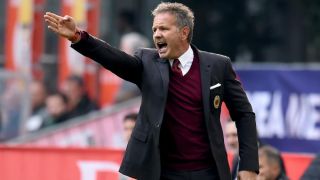 AC Milan must aim to win the Coppa Italia this season, according to head coach Sinisa Mihajlovic.

The San Siro-based side have gone 12 years without getting their hands on the trophy but have been handed a favourable draw this season, with Serie B side Crotone the visitors for a fourth-round clash on Tuesday.

With no European football this term and a Serie A title challenge looking unlikely, Mihajlovic is determined to see Milan triumph in the national knockout competition for the first time since their 6-3 aggregate win over Roma in 2003.

"The Coppa Italia is an important goal for us and we want to try and take this cup home," he said on Monday. "We know that it won't be easy but, when you are at Milan, the obligation is to win every game.

"I want to see the same attitude we showed against Sampdoria. Crotone are a respectable opponent. They will play the same kind of game as [Sampdoria boss Vincenzo] Montella implemented. They will be full of confidence because of their league position.

"They have great players and will be well organised. We have been lucky with the draw though and, as I said, because we are Milan, we have to win. If you lose, it is a catastrophe. The Coppa Italia is our goal because we aren't in Europe."

Milan recorded an impressive 4-1 victory over Sampdoria on Saturday but Mihajlovic believes they have delivered similar performances without the rewards so far this season.

"The attitude we showed that night was also seen in other games this season," the former Inter defender said.

"Not only against Sampdoria and Lazio but also in the derby and against Udinese in the first half and the second half against Genoa.

"I don't only look at the result. Sometimes, I am happier if we lose if the performance has been good. The result is what counts but when you play well, it is easier to win games.

"So, I look at the performance. I always ask for the right attitude and the team to give their best."