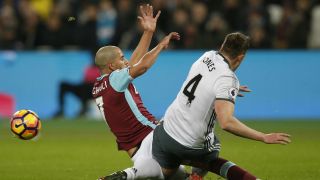 Referee Mike Dean guessed the decision to send off Sofiane Feghouli against Manchester United, according to former official Mark Halsey.

Feghouli was given a straight red card after just 15 minutes at the London Stadium after he arrived later than Phil Jones in a crunching 50-50 challenge.

Dean opted to dismiss the Algeria international and United went on to beat West Ham 2-0 thanks to second-half goals from Juan Mata and Zlatan Ibrahimovic.

Hammers boss Slaven Bilic accused Jones of "making a meal" of the incident in order to influence the decision, and Halsey - who retired in 2013 after 14 years of officiating in the top flight in England - believes Dean was affected by the centre-back's reaction and his failure to send off Everton's Ross Barkley for a crude challenge in the Merseyside derby last month.

"Because he missed the Barkley challenge, I think it's at the back of his mind," Halsey told talkSPORT.

"He looked away. If you look at the challenge, Phil Jones comes in more strongly. It's a fair challenge, they've both gone for the ball.

"I think Mike's got this wrong and I can see West Ham appealing.

"I have to say, Mike's turned round and seen Phil rolling around. He may be hurt but when you are hurt, you stay still. I think the way he's rolled around, he's injured himself the way he's gone into the challenge.

"Because of what happened at Goodison Park, I think he's guessed and he's got it wrong. It's a game-changing decision.

"Every player has to leave the ground at some stage in a sliding challenge. He takes his feet away. I thought he was sending off Jones - I really didn't expect any sort of card on that challenge. But because Jones has rolled around, I think that makes his mind up."

Halsey claims there is a lack of strong leadership in top-level refereeing and says more should be more done to utilise the experience of former officials in helping to train a new generation.

"You look at Mark Clattenburg, Martin Atkinson, Andre [Marriner] to a certain extent, but there's a whole lack of leadership and coaching," he said.

"Referees are just coaching themselves and going out and refereeing in their own way.

"We've got some top referees who have retired from the game and they should be used more."