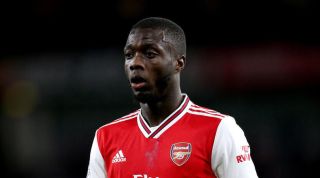 Arsenal broke their transfer record in the summer to sign Nicolas Pepe for £72m, but it's fair to say the Ivorian has had a difficult start to life in North London.

The winger, who tore up Ligue 1 for Lille last season, has only scored once from open play in the Premier League so far.

However, in The Metro new Arsenal manager Mikel Arteta spoke this week about the potential Pepe has, and explained why he thinks he has struggled to adapt thus far.

"I think it is a mixture of things.

"It was obviously a big change from France to come here. As well he found a team that at that moment probably wasn’t performing at its best. The environment wasn’t the best for him to settle.

"If he is willing to learn and willing to work hard I assure he has potential to be top absolutely top. The problem is confidence will only come when he plays, but he has to train well enough to convince the manager I am confident enough to play him."

Arteta's words echo the opinion of Thierry Henry earlier in the season who also spoke out in support of Pepe, saying:

One man who thinks Arteta will have a positive impact on Pepe is former Arsenal defender Martin Keown. Writing in The Daily Mail, he talks about the transformation of Raheem Sterling at Man City under Pep Guardiola, and how Guardiola credited Sterling's form to Arteta's coaching:

"It will be interesting to see the impact he can have on Nicolas Pepe, too," Keown said. "He has been one of the culprits needlessly taking too many touches on the ball when it might be nice to see his best work coming off it. That's what Sterling does."

Quiz! Can you name every Arsenal player with 10+ Premier League goals?