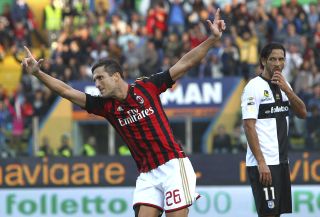 The 29-year-old Argentine is on loan from city rivals Inter but has only been able to make two appearances for Massimiliano Allegri's side.

A knee injury sidelined Silvestre soon after his move and he has now been struck by a muscle problem that rules him out of the clash with Lazio on Wednesday.

He could yet face a lengthy absence with the club revealing further tests will take place in 10 days' time.

"AC Milan announces that Matias Silvestre has reported an injury to the soleus muscle of the right leg," a statement on the club's official website read.

"In 10 days the player will control further medical examination."

Silvestre netted his first goal for Milan on Sunday, but it was not enough to stop his side falling to a 3-2 defeat against Parma.