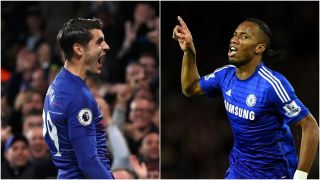 Christian Pulisic has become one of the most expensive players in Chelsea's history, slotting in behind Kepa Arrizabalaga and Alvaro Morata on the club's list of biggest buys.

United States international Pulisic will join the Blues ahead of the 2019-20 season after sealing a €64million move from Borussia Dortmund, where he will stay on loan until the end of the campaign.

Chelsea have regularly splashed the cash during the Roman Abramovich era, but there have been some notable misses as well as hits among their most expensive outlays.

Pulisic will want to follow in the footsteps of club legend Didier Drogba, rather than flops like Fernando Torres and Andriy Shevchenko...

Pulisic will remain at BVB on loan until the end of the season. pic.twitter.com/jAur5xWwuQ— Borussia Dortmund (@BlackYellow) January 2, 2019

It remains early days for Kepa, who became the world's most expensive goalkeeper when he joined from Athletic Bilbao, replacing Thibaut Courtois after the Belgian's move to Real Madrid last year. But at just 24, Kepa could be Chelsea's number one for a decade and the signs in his first half-season at Stamford Bridge have been broadly positive.

Kepa's fellow Spaniard, Morata has struggled to justify what was a club-record fee when he signed from Madrid. The striker scored 11 Premier League goals in his debut campaign and has hit five so far this term as he battles with Olivier Giroud for selection. But Maurizio Sarri has preferred to use Eden Hazard as a false nine of late with the Italian seemingly losing faith in Morata, who has subsequently been linked with a move away.

Italy international Jorginho followed Sarri from Napoli to Stamford Bridge last year and he immediately became indispensable for the club in his specialist defensive midfield role. Chelsea beat champions Manchester City to Jorginho's signature and, although he has been stifled once or twice in Premier League matches, he is a player the club can build around for years to come.

Chelsea's then club-record swoop for Torres in January 2011 provoked anger on Merseyside, but Liverpool never really missed him as the Spaniard failed to fire in his four-year spell at Stamford Bridge. Although he scored a pivotal goal in a Champions League semi-final triumph over Barcelona, Torres found the net just 48 times in all competitions, eventually leaving for AC Milan and then a return to Atletico Madrid, whom he left for J-League side Sagan Tosu last year.

Another undoubted flop, Bakayoko endured a miserable maiden campaign in the Premier League after joining from Monaco, whom he helped to the Ligue 1 title in 2016-17. A red card in a 4-1 drubbing at Watford last February was the nadir and he has made little impact on loan at Milan this term. If and when Chelsea cut their losses on Bakayoko they look set to lose a small fortune on the midfielder.

A goal machine and Champions League winner at Milan, Ukraine legend Shevchenko never hit the heights he reached in Serie A following his 2006 switch. Shevchenko looked a shadow of himself at Stamford Bridge and scored just 22 goals in 77 games, going back to Milan on loan before ending his career with Dynamo Kiev.

It is fair to say former Marseille hitman Batshuayi's Chelsea career has not been what he hoped. The Belgium international played second fiddle to Diego Costa in his first season at the club, although he did score the goal that clinched the 2016-17 Premier League title at West Brom. Batshuayi looked sharp on loan at Dortmund in the second half of last season but has only scored one league goal in this term's spell at LaLiga side Valencia.

Essien's arrival at Chelsea in 2005 brought about the end of a three-month-long transfer saga, but he was worth the wait. His energy and physicality in midfield proved invaluable to Chelsea, the Ghanaian winning the Premier League twice and the Champions League once in a decorated nine-year spell.

Booed by Chelsea fans as he knocked them out of the Champions League in 2014, Costa became a hero at Stamford Bridge before his time at the club ended on a sour note. His goals fired them to two Premier League titles, but a difficult relationship with Antonio Conte spelled the end of his time at the club and he rejoined Atletico last January after a period in exile.

Unlike Batshuayi, this ex-Marseille striker absolutely lived up to the billing. A fearsome presence in the box with a flair for the spectacular, Drogba helped Chelsea to four Premier League titles, four FA Cups, three League Cups and converted the winning penalty in the shoot-out as they beat Bayern Munich in the 2012 Champions League final, furthering his legendary status at the club - arguably their best ever signing.