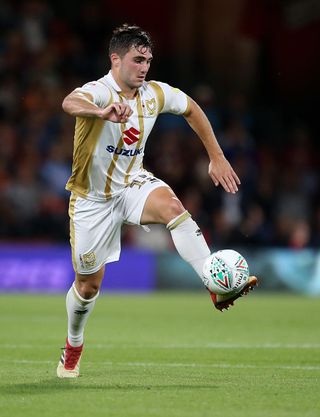 MK Dons will check on the fitness of Jordan Moore-Taylor ahead of Saturday’s match at home to Oxford in Sky Bet League One.

The defender missed the recent 1-1 draw at Doncaster after complaining of pain in the knee during the warm-up.

If unavailable, Moore-Taylor will join Rhys Healey (thigh) and Sam Nombe (knee) on the sidelines, although the pair are expected to return early into the new year.

Russell Martin will also be without suspended duo Baily Cargill and George Williams, but the latter serves the final match of his three-game ban for this fixture.

Oxford boss Karl Robinson will be missing a handful of players when he returns to his old club on Saturday.

Anthony Forde will be out for the foreseeable future after breaking four ribs and puncturing a lung during last weekend’s goalless draw with Shrewsbury.

James Henry also came off with a thigh problem and may only be fit enough for the bench at MK Dons, but Alex Gorrin will return after suspension.

Goalkeeper Simon Eastwood is still out with a knee injury and Cameron Brannagan (knee) and Shandon Baptiste (groin) are unlikely to feature at the weekend.