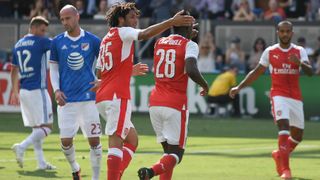 Substitute Chuba Akpom netted a late match-winner as Arsenal saw off the MLS All-Stars 2-1 in San Jose on Thursday.

Akpom came off the bench past the hour-mark and he proved to be the difference, scoring from close range with three minutes remaining after big-money recruit Granit Xhaka made his debut for the Premier League giants at Avaya Stadium.

Scores were level at half-time following Didier Drogba's equaliser at the third time of asking for Kaka and Co., cancelling out Joel Campbell's 11th-minute penalty.

The result ended the All-Stars' run of consecutive wins against European opposition, having upstaged Tottenham last year and Bayern Munich in 2014.

Sorry All-Stars, this is one north London team you couldn't beatJuly 29, 2016

Arsenal settled quickest of the two teams, unsurprising given the lack of cohesion and understanding between the All-Stars.

And while Giovani dos Santos forced Petr Cech into an early save, Arsenal took advantage of a disjointed back four, with Campbell stepping up to convert from the spot.

The Costa Rica international lobbed the ball over onrushing goalkeeper Andre Blake and was brought down by Laurent Ciman, before channelling his inner Simone Zaza as he shuffled toward the ball in a stuttered run-up and fired into the bottom corner of the net.

Tucked away. Campbell sneaks one past Andre Blake to put in front. July 29, 2016

Kaka and his All-Stars, however, did manage to draw level thanks to Drogba on the stroke of half-time.

After receiving a throughball from Dos Santos, Drogba bundled the ball into the back of the net after his initial shot was saved by Cech and blocked on the line.

Xhaka came off the bench at half-time to make his debut for the Londoners, the Switzerland international looking composed on the ball in midfield, forcing David Bingham into two saves.

All-Star substitutes Cyle Larin and Chris Wondolowski almost combined for the match-winner in the 82nd minute, but Arsenal snatched the victory three minutes from time via Akpom.