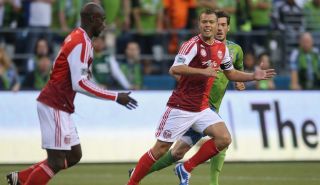 A goal to striker Kalif Alhassan right on the strike of half-time was all the Timbers needed to edge out a 10-man Sounders outfit at JELD-WEN Field.

The victory takes the Timbers to the top of the Western Conference standings, leapfrogging both the Sounders – who drop to third – and Real Salt Lake.

While Portland seem to be hitting form at just the right time of the year, the Sounders are on the slide and have now tasted defeat in their last three matches.

In a typically bruising affair between the two fierce rivals, it took a piece of luck to settle the issue.

Jack Jewsbury's free kick deflected to an unmarked Alhassan, who blasted the ball past a stranded Marcus Hahnemann from just outside the box.

Despite the second-half sending off of Sounders skipper Osvaldo Alonso for an elbow to the face of Will Johnson, the visitors certainly had chances to snatch a draw.

Both Clint Dempsey and Steve Zakuani saw efforts came back off the woodwork - the latter in the first minute of stoppage time.

Portland's win sets up a mouth-watering top of the table clash with Real Salt Lake next weekend, while the Sounders will aim to end their five-game winless run at FC Dallas.