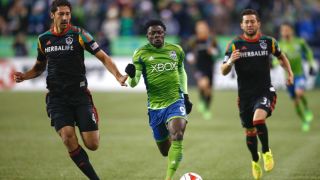 The Sounders claimed a maiden Supporters' Shield by topping the Western Conference standings in 2014 after defeating the Galaxy 2-0 in the final match of the regular season.

However, the Galaxy had the last laugh as they pipped the Sounders 2-2 on away goals in the Conference finals in November.

Fast forward to April and the Stubhub Center in Carson is the venue as the Galaxy host the Sounders, with both teams attempting to kick-start their seasons.

After back-to-back defeats Los Angeles are eighth in the West, two points adrift of Seattle, who returned to winning ways via a narrow 1-0 victory last week.

The Sounders will be without suspended midfielder Gonzalo Pineda for the trip to California but designated player Osvaldo Alonso is set to make his second successive appearance after recovering from groin surgery.

"He's still not 100 per cent game-fit, and his game touches aren't 100 per cent there yet, but I think he was really good for his first time out," Sounders coach Sigi Schmid said of Alonso on Tuesday.

"This is an important week for him because he's recovering from the game. We're still building his fitness and altering his training at times."

The Galaxy will be hoping for a response after they were outplayed by the Vancouver Whitecaps in a 2-0 defeat last time out.

"They just played better than us; they were the better team all around. They kept the ball, they counter attacked very, very well and at the end of the night they scored two goals," Robbie Keane said.

"You just have to hold your hands up and accept we weren’t good enough tonight and they were the better team."

Western Conference pacesetters the Whitecaps are away to San Jose Earthquakes on Saturday - three days after fighting back to draw 2-2 at home to Columbus Crew.

Elsewhere, New York City - fifth in the East - will be without star David Villa for Saturday's trip to Philadelphia Union, with the Spanish forward yet to recover from an adductor strain.

Orlando City will be out to arrest a three-match winless streak when they tackle Portland Timbers on Sunday, while FC Dallas kick off the round against Western Conference cellar-dwellers Colorado Rapids on Friday.