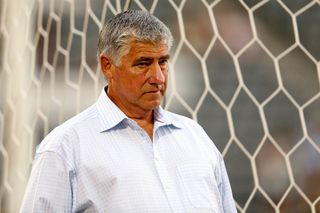 The Sounders are losing their grip on second place in the Western Conference after dropping points again in the 1-1 draw with San Jose Earthquakes, as in-form Dallas have closed to within three points.

Having taken the lead on Wednesday, Schmid's men were denied all three points by a Chris Wondolowski equaliser but the coach has warned his players not to push the panic button ahead of their trip to Portland.

"You just have to stay positive," he said. "You've got to work for each other, you've got to bring the right attitude into games and into perspective every day.

"There's enough quality for us to get out of [the slump], you've just got to stay positive."

If Dallas are to move ahead of them they must end leaders Real Salt Lake's six-game unbeaten run.

In the Eastern Conference DC United will hope the absence of Eddie Johnson does not derail their challenge at the top as they tackle leaders Sporting Kansas City.

The striker will sit out the clash at Sporting Park after being handed a two-match ban by the MLS Disciplinary Committee for kicking the ball at a fallen opponent against Salt Lake.

Johnson was booked at the time for the incident involving Carlos Salcedo, but retrospective action saw him handed the suspension.

Two points separate the sides at the top of the table with Sporting hoping to extend their advantage and gain revenge for the 1-0 defeat they suffered in June.

Toronto could take advantage of a slip-up from either side and cut the gap at the top if they beat Chicago Fire, while Columbus Crew will hope to build on their win over LA Galaxy when they host Houston Dynamo.

Montreal Impact, buoyed after ending their seven-game losing streak against Chicago, entertain the New York Red Bulls at Stade Saputo, and two sides battling for a top-five spot in the Western Conference meet at the StubHub Center.

LA Galaxy sit four points clear of Vancouver Whitecaps going into the match and can strengthen their grip on fourth with a victory.