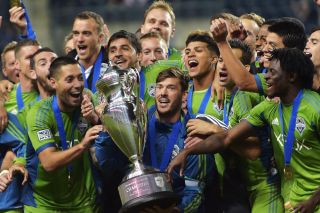 Captain Clint Dempsey and star team-mate Obafemi Martins were on target in extra time as Seattle beat Philadelphia Union 3-1 in the US Open Cup final on Tuesday.

Sounders midfielder Chad Barrett cancelled out Maurice Edu's opener in the second half as the match went beyond 90 minutes at PPL Park.

The win - Seattle's fourth Open Cup triumph in six years - extended the Western Conference leaders' (54 points from 27 games) unbeaten streak to six games in all competitions ahead of their trip to Red Bull Arena.

"We missed a few chances and we needed to get a few breaks, but the team had a lot of desire and determination," Sounders coach Sigi Schmid said.

"This was the hardest final we've played in terms of figuring who to keep on the field and who to take off. I don't know who's going to play Saturday, but we'll worry about that later.

"We've gone to five finals in six years and now we've won four, with two finals on the road."

Seattle - three points clear of Los Angeles Galaxy with one game in hand - will need to be at their best against a New York side in good form.

Unbeaten in three games and boasting leading goalscorer Bradley Wright-Phillips (21), the Red Bulls sit fourth in the Eastern Conference with 42 points after 28 rounds.

Defeat to New York would open the door for the Galaxy, who could move top of the West on goal difference if they beat rivals Dallas on Saturday.

The Galaxy have played out back-to-back draws, but prior to that they won five games on the bounce.

Real Salt Lake - eight points off the pace - will come up against an out-of-sorts Colorado, who are six points outside the top five after going eight matches without a win.

Philadelphia have the chance to respond to their loss to Seattle when they go head-to-head against fellow Eastern Conference team the Houston Dynamo on Saturday.

Elsewhere on Saturday, third-placed New England can extend their winning streak to six matches with victory at Columbus Crew.

Portland Timbers - fresh from their rout of Olimpia in the CONCACAF Champions League - will be out to take fifth spot from the Vancouver Whitecaps when the two West teams meet at Providence Park.

Meanwhile, Toronto will be aiming to end their six-match winless run when they host Chivas USA on Sunday.