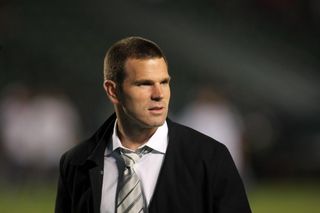 Vanney, who replaced Ryan Nelsen at the helm on Sunday, leads his out-of-form side into a clash against the Philadelphia Union on Saturday.

Toronto are winless in four matches and host a team also competing for a play-off spot in the Eastern Conference.

Vanney said he wanted to see positivity and confidence from Toronto.

“We want to start the game with the idea that we're going to win the game," Vanney told a news conference.

"I want to dictate the game on both sides of the ball. I don't like waiting and letting the other team dictate what we do.

"Any time you get a new coach in, there's going to be that initial burst. We've talked about how the first 15 minutes of this game will dictate a lot.

"They're going to come in flying, trying to impress the new coach. But we just have to get through the first 15 minutes.

"After that, it will settle down and the game should take care of itself."

The Houston Dynamo and Montreal Impact, bottom two in the conference, also do battle.

Eastern Conference leaders DC United will fancy their chances when they travel to the Vancouver Whitecaps.

The San Jose Earthquakes need a win when they visit the Portland Timbers and New England are aiming for their fourth straight win when they host the Chicago Fire.