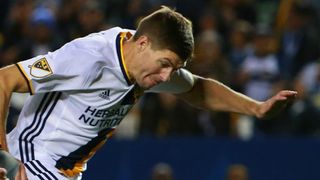 LA Galaxy overcame an unsuccessful first-half penalty and an early deficit to condemn Real Salt Lake to their first defeat of the MLS season, after rallying to a convincing 5-2 victory.

Former Liverpool captain Steven Gerrard had his sixth-minute penalty saved by Nick Rimando and RSL went up the other end and opened the scoring 10 minutes later via Juan Martinez on Saturday.

The Galaxy, though, hit back within three minutes thanks to Gyasi Zardes, and it was one-way traffic from that point as the home side scored three unanswered goals prior to the break.

Mike Magee, Emmanuel Boateng and Giovani dos Santos were all on target, while Gerrard made amends in stoppage time with a sublime solo effort after RSL's Javier Morales converted a 70th-minute spot-kick.

RSL's defeat saw them lose second spot in the Western Conference to Colorado Rapids, who extended their winning streak to three games courtesy of a 3-1 victory against Seattle Sounders.

Sebastian Giovinco continued to lead Toronto FC after his brace saw off Didier Drogba's Montreal Impact 2-0 in the all-Canadian affair.

After his solitary goal was enough to down DC United 1-0 last week, Giovinco was at it again on Saturday, with the reigning MVP's two strikes lifting Toronto to back-to-back wins for the first time this season.

A rash challenge on Jozy Altidore by Victor Cabrera saw Giovinco step up to the spot and the Italy international made no mistake, five minutes before half-time.

Giovinco sealed the points nine minutes from time, when he fired a low shot across Impact goalkeeper Evan Bush.

The win helped Toronto up to third in the Eastern Conference, a point behind the Impact and Philadelphia Union, who are level on 12 points after seven matches.

Philadelphia returned to winning ways via a 2-0 victory at home to struggling New York City, who are searching for their first win since the opening day of the season, a run of six matches.

Staying in the East, DC United jumped into the top six, accounting for New England Revolution 3-0, a match which saw the referee reverse an offside call for Alvaro Saborio's goal.