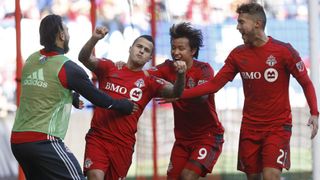 Another dazzling performance and hat-trick from Sebastian Giovinco led the streaking Toronto FC to a 4-1 win over New England Revolution on Saturday.

A fortnight on from his hat-trick against DC United, reigning MLS MVP Giovinco was at it again with a three-goal haul to inspire Toronto a fourth consecutive win.

Giovinco produced yet another stow-stopping display to take his tally to seven goals in four matches, setting the tone in the 20th minute thanks to a thunderous volley with the outside of his boot, which curled around Kei Kamara and New England goalkeeper Bobby Shuttleworth in Toronto.

If the first goal was not enough, Giovinco went a long way to outdo his opening effort, finding the top-left corner of the net nine minutes later.

Giovinco completed his hat-trick from the penalty spot with 14 minutes remaining for a league-leading 15th goal of the season, before Revs substitute Teal Bunbury pulled a goal back in the 88th minute, only for Jozy Altidore to come off the bench and restore Toronto's three-goal cushion in stoppage time.

Toronto are second in the Eastern Conference, only a point adrift of New York City with a game in hand, and three clear of Montreal Impact.

Matteo Mancosu - on loan from Bologna - helped the Impact to a 1-0 win over lowly Houston Dynamo in the absence of suspended star striker Didier Drogba.

Colorado Rapids remain in hot pursuit of FC Dallas in the Western Conference after seeing off Vancouver Whitecaps 2-0.

Marlon Hairston and Dominique Badji inspired the second-placed Rapids, who are three points behind Dallas with two games in hand.

In other results, Steven Birnbaum salvaged a last-gasp 2-2 draw for DC at home to Philadelphia Union, the defender equalising in the 94th minute.