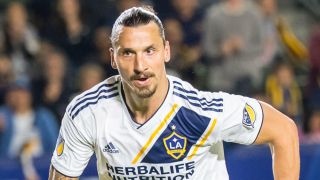 Zlatan Ibrahimovic scored as the LA Galaxy were held by DC United in MLS, while Tesho Akindele was the hero for Dallas Wednesday.

Ibrahimovic netted his 10th goal of the season as the Galaxy were held to a 2-2 draw by DC United, who will be eager for England great Wayne Rooney to make his debut.

United are now winless in five league games and sit bottom of the Eastern Conference, with Rooney expected to make his debut in their next outing – a clash against the Vancouver Whitecaps July 14.

Ibrahimovic opened the scoring with a fine volley in just the fifth minute, and Chris Pontius doubled the Galaxy's lead.

Zoltan Stieber pulled a goal back for DC with a good strike from an angle and they secured a point through Darren Mattocks, who equalised in the 85th minute.

In a clash between the respective conference leaders, West table-toppers Dallas recorded a 3-2 win over East frontrunners Atlanta United.

Come for the goal, stay for the celebration.Reto Ziegler puts on the board! July 5, 2018

The forward tapped in the equaliser four minutes before half-time and made it 2-1 in the 73rd minute.

However, Akindele delivered late for Dallas, equalising before scrambling in an 88th-minute winner.