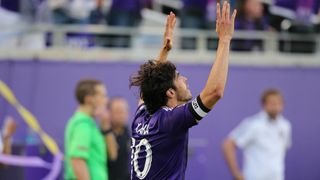 Back on the pitch following a hamstring injury suffered on the opening weekend of the season, Kaka made an immediate impact as high-flying Orlando accounted for Colorado Rapids 2-0 on Saturday.

After Carlos Rivas broke the deadlock in the 70th minute, former AC Milan and Real Madrid star Kaka came off the bench to seal Orlando's fifth successive home victory in the first minute of stoppage time.

Kaka was on hand to tuck away the rebound from inside the six-yard box after Cyle Larin's strike hit the post.

Orlando are top of the Eastern Conference, two points clear of New York Red Bulls, who overcame Bastian Schweinsteiger's Chicago Fire 2-1 thanks to goals from Bradley Wright-Phillips and Kemar Lawrence.

Seattle completed a stunning second-half comeback to earn a 3-3 draw with New England.

Trailing 3-0 in the 75th minute, the Sounders rallied through Nicolas Lodeiro before Will Bruin equalised five minutes from time.

Osvaldo Alonso scored the winner with two minutes remaining at home to the Revolution, who played out their third consecutive draw.

It was a five-goal thriller in Columbus as Jack Harrison's brace lifted New York City past the Crew 3-2.

Yangel Herrera – on loan from parent club Manchester City – also scored for New York, who trailed 2-1 early in the second half.