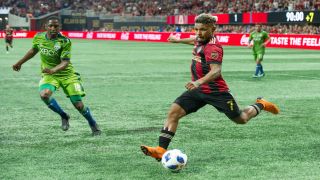 Atlanta United and Los Angeles FC both missed a chance to strengthen claims of winning their respective MLS conferences after they played out draws against Seattle Sounders and Portland Timbers.

Eastern Conferences leaders Atlanta were held to a 1-1 draw by 10-man visitors Seattle on Sunday.

Atlanta were ahead of New York City on goal difference prior to kick-off having played the same number of games but fell behind to Nicolas Lodeiro's penalty on the stroke of half-time.

Leading scorer Josef Martinez responded for the hosts early in the second half, when he looped a header over Sounders goalkeeper Stefan Frei for his 19th goal of the season in front of a record MLS crowd of 74,243 at Mercedes-Benz Stadium.

The Sounders were reduced to 10 men when Jordan McCrary received a second yellow, but they defended gallantly in the final half-hour, despite Leandro Gonzalez-Pirez hitting the bar from close-range.

Elsewhere, LAFC missed an opportunity to close the gap on Western Conference leaders Dallas to one point after a goalless draw against Portland.

Chances were at a premium for both sides on a humid evening in California, but the game came to life with five minutes remaining when Lee Nguyen received a straight red card for a challenge on Sebastian Blanco.

Despite being a player down, Los Angeles could have won it in stoppage time as Mexico international Carlos Vela headed straight at Jeff Attinella from six yards.

Portland climb up to fourth in the west and have games in hand on the teams above them, while Seattle's point edges them away from the bottom of the table.