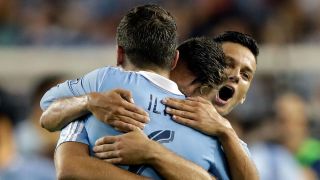 Sporting KC opened the scoring at Children's Mercy Park in the 47th minute, when Yohan Croizet received a pass from Johnny Russell with his back to goal, before turning and firing a low finish past Bobby Shuttleworth.

Diego Rubio doubled the lead two minutes past the hour mark, Russell again supplying the assist as the pace and movement of the hosts' attack proved too much for the Minnesota defence to cope with.

After Dallas dropped points in a 1-1 draw at Houston Dynamo, second-placed Sporting's win sees them close to within a point of their rivals.

Elsewhere on Saturday, Colorado had two players, Niki Jackson and Bismark Boateng, sent off in the first half of their match at home to Real Salt Lake, who ran rampant to win 6-0, Jefferson Savarino netting a brace for the dominant visitors.

In the Eastern Conference, Sebastian Giovinco scored twice in the space of 15 first-half minutes as Toronto eased to a 3-1 win at home to Montreal Impact.

Cory Burke netted the only goal of the game early in the second half for Philadelphia Union in a 1-0 victory over New England.

And in the final match of the day, Vancouver Whitecaps struck three times in nine minutes to come from 2-0 down to win 3-2 away to San Jose Earthquakes.