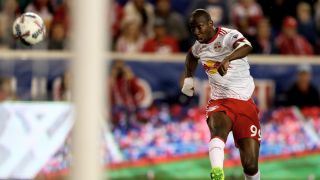 The 33-year-old, who moved to New York in 2013, raced onto a pass in-behind DC's defence inside two minutes and fired the ball under David Ouste at Audi Field on Wednesday.

Former Manchester United and England captain Wayne Rooney came off the bench in the 57th minute for DC, but the hosts were unable to find an equaliser as they remained bottom of the east.

Earlier, Philadelphia Union stayed seventh in the east after coming from behind to beat Houston Dynamo 3-1.

Mauro Manotas netted his 11th goal of the season for Houston, who lost for the first time in five matches, dropping further away from the pack of clubs chasing Western Conference leaders and rivals Dallas.

Former Nantes striker Alejandro Bedoya levelled for Philadelphia past the half-hour mark before goals from Cory Burke and a late penalty from Fabrice Picault in the second half, downed the Dynamo.

The late game in MLS saw Seattle Sounders claim a 1-0 win at San Jose Earthquakes thanks to a goal in the 62nd minute from Peruvian Raul Ruidiaz.