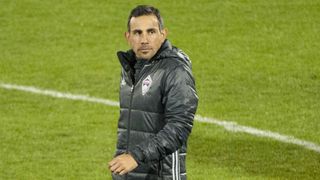 Credit the Colorado Rapids — the organization did not live in denial this offseason.

The team finished last in the Western Conference with just 37 points. Missing the playoffs for the second straight year and third year out of four was enough to spark plenty of change on the roster.

Seven players who were in coach Pablo Mastroeni’s first starting XI of the 2015 season are not on the 2016 roster. At the very least, that means fans will see a new-look Rapids this season and Mastroeni is hopeful to have it sorted out before the season gets underway in San Jose on March 6.

“Anytime you make such drastic changes to a roster, it’s going to take some time,” Mastroeni said. “But we sat as a coaching staff in the offseason and really tried to find the best way to create an environment and culture that is conducive to team camaraderie and team building in order to quickly pull together a bunch of guys from different places. I think to this point it's been fantastic.

“Like every other team, you have an idea of the way you want to get going with the players you have available to you, but we have a couple of weeks left before we have to cement what that starting lineup is going to look like on March 6.”

Mastroeni is set to keep the 4-2-3-1 but hopes for the formation to work a little better than it did last season, when player tendencies tended to create a style that went against his vision.

“What I say about formations is the people you put in those different positions will make it look a lot different,” he said. “Last year we played a 4-2-3-1, but because we played with Vincente Sanchez and Luis Solignac it looked more like a 4-3-3 because of their desire to get wide and isolate the players 1v1. A lot of formations have to do with the individual tendencies of the players, but I think it will look more and more like a 4-2-3-1, with a lot of dynamic movement in amongst those front four players.”

Who will make up that dynamic formation is still, by Mastroeni’s admission, a work in progress. The revamped attack will transfer Shkëlzen Gashi as its big name, while Marco Pappa, acquired from Seattle, should slide into the attacking midfielder role and Kevin Doyle will lead the line. That other spot could go to Dominique Badji, Solignac or perhaps Dillon Serna, who is back and playing after an injury to slowed his start to the preseason.

In the midfield, Dillon Powers is likely to be a key figure alongside offseason addition Michael Azira. Sam Cronin and the newly acquired Zach Pfeffer should also be in the mix.

Another newcomer, fullback Eric Miller, is in contention for a starting spot on the right side of the back line. Trinidad and Tobago international Mekeil Williams is the likely starter on the left. The center backs may be Bobby Burling and Axel Sjoberg, with Sean St. Ledger in the mix.

Zac MacMath, acquired permanently after spending last year on loan with the team, figures to start the year in goal following Clint Irwin’s departure. How long that lasts may well depend on whether rumors linking Tim Howard to Colorado come to fruition.

But there could easily be changes during the season. On a roster with this much turnover, the chaos of the unknown can provide opportunity for those who can rise to the occasion. Mastroeni said as much when discussing Serna’s chances of eventually cracking the starting XI.

“My expectations with all the players is that they’re going to be competing for a starting spot on this team,” he said. “My mentality as a coach and a person is you always strive to be the very best version of yourself that you can possibly be. That’s no different for the players. It’s up to the individual players to fulfill those expectations they have for themselves.”

Top Newcomer:Shkëlzen Gashi. The Rapids owned the worst attack in MLS last season, scoring just 33 goals — the only team in the league to average less than a goal per game.

If Gashi can perform as he did in 2014-15, he’ll change that. The attacker notched 22 goals for Basel in the Swiss Super League, after picking up 19 the year before for Grasshopper. The Albanian had three in 10 appearances this season before his move to Colorado. Naturally, his new coach is excited about what he brings to the table.

“I think a player with his type of mentality, who finds his ways into good spots, is a position we’ve missed sorely over the last year,” Mastroeni said. “Being a team that’s created a good number of chances but not finishing, I think he’s an integral piece — along with Pappa, Doyle and Dillon Powers — that will make it a very formidable attacking core for us.”

Player to Watch:Dillon Powers. The Rapids' revamped attack may not come to much if there’s not a good link between it and the defense. That’s where Powers, who seems likely to line up in the central midfield, comes in. He’ll need to contribute offensively and defensively and build on what he did last year, when he finished 25th in MLS in chances created with 44.

The 25-year-old Powers spent some of this past offseason training with English Championship side Reading, an experience Mastroeni believes has already made a positive impact on his game.

"I think the experience for him was great for his career,” Mastroeni said. “He went there and saw a different level of commitment — a different type of football that has a longer history — and a lot of passion that has developed over the years in a league like the Championship. I think he came away with a burning desire to not only become a better player, but change the way that he lives.

“He’s altered his diet — he’s become vegan. He’s set up a fitness program in the offseason to be able to get more out of his game from that perspective as well. I think it was a life-changing event for him and I think that’s trickled into the preseason, where he’s been a very good performer — a leader. I hope that it continues to influence his game moving forward.”

2016 Outlook: It’s hard to piece together what to expect from the Rapids this year based on how many new additions they have made. It's a team that reportedly remains in the hunt for another big name — whether that will be Howard, someone else or no one remains to be seen.

It would be easier to feel better about their prospects in the Eastern Conference. But in a Western Conference that figures to be the stronger half of the league again, the Rapids face an uphill battle to make the postseason. Improvement is certainly possible, but may not be enough grab a playoff spot.