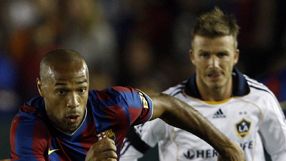 A dream final between the Los Angeles Galaxy and New York Red Bulls that would have featured two of world football's most glamorous names in David Beckham and Thierry Henry failed to materialise, denying fans and league officials the showcase they had hoped for.

Instead, the MLS championship will feature Dallas and Colorado, two modest teams without a single designated player, in a match that is likely to attract few casual fans on a busy sporting Sunday packed with attractive viewing options.

"Who would have thought at the beginning of the year that FC Dallas and Colorado Rapids would be in the championship game?" wondered Dallas coach Schellas Hyndman to reporters.

While Dallas and Colorado are capable of producing attractive, entertaining soccer, the final is sure to be dwarfed in the television ratings by a Sunday-night NFL showdown between the New York Giants and Philadelphia Eagles that will kick off at the same time.

The hugely popular NASCAR series will crown its series driving champion on Sunday while the Canadian Football League will play two semi-finals to decide the teams for the Grey Cup.

In a city consumed by ice hockey and the Toronto Maple Leafs, the MLS Cup has created only a modest buzz with little outward evidence that the championship game is even being staged in Canada for the first time.

Banners at the entrance to the grounds tout the "Everything You Want to Know About Sex Show" occupying the convention centre next to BMO Field, and not the game.

"It's a very competitive sports market and we are the newest kid on the block so without doubt we have to fight hard and be creative and make good decisions and invest properly to break through the clutter," MLS commissioner Don Garber told Reuters.

"But we're doing a pretty good job, the league is much further along than we thought it would be and we just need to stay focused and keep the league growing."

Even in Denver, the Rapids have scrapped for attention in a crowded sports market averaging just 13,328 fans a game this season.

The situation was much the same for FC Dallas, which only twice this season managed to pull in more than 15,000 fans, topping out at 15,933.

With near-freezing temperatures and rain forecast, there are mounting concerns that the final could be played out in front of hundreds of empty seats.

While Toronto FC is considered the model MLS franchise held up as the prototype operation for expansion teams, club supporters have bristled at what they see as steep ticket prices for the final which many were forced to purchase as part of their season-ticket packages.

"I expect a sellout and hopefully all those people who bought those tickets as part of season-ticket packages come out to support the league," said Garber.