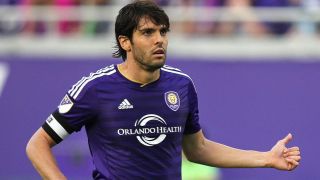 The Brazilian made it two goals in four games, scoring in the 30th minute of an entertaining first half to earn his team a draw.

Orlando sit fourth in the Eastern Conference, while the Impact remain winless.

Montreal had looked on track for their first victory when they struck twice in the opening 27 minutes, with Ignacio Piatti making it 1-0 from the penalty spot.

Jack McInerney doubled the lead when a defensive mix-up allowed him to loop a shot over a stranded Donovan Ricketts.

Pedro Ribeiro dragged the visitors back into the contest, putting away a scrappy goal in the 29th minute.

And Ribeiro helped set up the equaliser just a minute later, his pass collected by Kaka and finished well from close range.

But, after that half-hour, neither team was able to find a winner as the spoils were shared.

There were contrasting fortunes for the two New York teams.

The Red Bulls went top of the East after a 2-1 victory over the Columbus Crew, with Bradley Wright-Phillips making it two goals in as many games.

But Mike Grella's 67th-minute goal proved to be the match-winner for the visitors and the Crew were reduced to 10 men late on when Federico Higuain saw red.

Without the injured David Villa, New York City suffered their first ever loss, going down 1-0 at home to Sporting Kansas City.

Robert Earnshaw netted a late winner in the Vancouver Whitecaps' 2-1 victory at home to the Portland Timbers.

The Houston Dynamo's clash at home to the Colorado Rapids and the Seattle Sounders' trip to Dallas both finished 0-0.