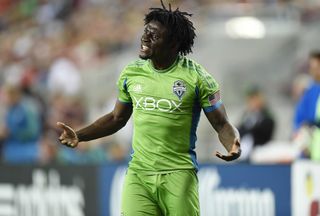 Obafemi Martins bagged a brace, while captain Clint Dempsey and Marco Pappa scored goals of their own as the Sounders moved level on points with Los Angeles Galaxy in the Western Conference.

The Sounders (19 wins) and Galaxy (17) are locked on 60 points with three matches remaining as they battle for the Supporters' Shield - awarded to the team with the best regular-season record.

United States international Dempsey broke the deadlock in the 11th minute at Dick's Sporting Goods Park, converting a penalty after Colorado defender Marvell Wynne handled the ball inside the area.

It got better for the visitors five minutes later as Dempsey played in Pappa with a cheeky back-heel before the Guatemalan winger lobbed the ball over Irwin.

The Rapids were given a glimmer of hope in their attempts to stay in the play-offs hunt, with Deshorn Brown firing low into the bottom corner two minutes shy of the interval.

Martins restored Seattle's three-goal advantage and took his season tally to 17, with a side-footed effort inside the six-yard box in the 70th minute.

Chivas had not tasted victory since their 3-1 win at the Vancouver Whitecaps in July, while they were on a seven-game losing run.

Meanwhile, Chicago Fire bowed out of play-offs contention after playing out a goalless draw at home to fellow Eastern Conference strugglers the Montreal Impact.

Needing a win to stay in the post-season race, the Fire could only settle for a draw - their 18th of the campaign - against the East's bottom team.