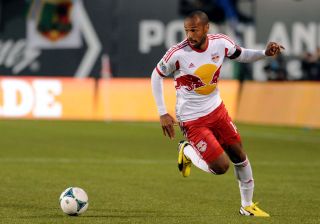 The Red Bulls blew the game open early in the second half in New York with Ibrahim Sekagya and Lloyd Sam scoring within 11 minutes of the break to make it 3-1 for the home side.

Goals to Eric Alexander and Jonathan Steele capped off a second-half blitz from the Red Bulls, who lifted their most significant piece of silverware with the win.

The victory on Sunday saw New York finish the MLS regular season with the best record - 59 points from 34 games - to lift the Supporters' Shield, while it ensured the Fire missed out on a play-offs berth.

While the Red Bulls have been crowned Eastern Conference champions on two other occasions, they had never won the Supporters' Shield before Sunday, while they will also be aiming for their maiden MLS Cup triumph when the conference semi-finals start on Saturday.

The game did not begin well for New York at the Red Bull Arena as Chicago took the lead in the sixth minute through Mike Magee.

But in the 24th minute, Thierry Henry equalised for the hosts in spectacular fashion, bringing the ball down on his chest and then volleying into the top corner from the edge of the area.

A goalmouth scramble five minutes into the second half saw Sekagya get the final touch to put the Red Bulls in front before Sam curled home a fine effort in the 56th minute.

New York continued to pepper the visitors' goal and Alexander made it 4-1 in the 77th minute when he finished a one-on-one opportunity against Chicago goalkeeper Sean Johnson, while Steele scored the home side's fifth with six minutes remaining when he tapped in Henry's cross.

Chicago substitute Quincy Amarikwa made it 5-2 in the 90th minute but it made little difference to the result as the Red Bulls celebrated their Supporters' Shield triumph in front of their home fans.

The loss saw Chicago finish sixth in the Eastern Conference with 49 points but an inferior goals-scored record to fifth-placed Montreal Impact, who will compete in the play-offs ahead of the Fire.

The Seattle Sounders' 1-1 draw at home against the Los Angeles Galaxy included the most controversial episode on Sunday with the visitors denied a clear goal in the first half.

Clint Dempsey had put Seattle in front on the half-hour mark but Galaxy were denied an equaliser four minutes before half-time when Omar Gonzalez's header from a corner was cleared away by Osvaldo Alonso after it had crossed the line.

While replays clearly showed the ball had crossed the line, neither the referee nor his assistant signalled the goal, and the visitors had to wait until the 78th minute and Robbie Keane's volley from the edge of the area to secure a draw.

The result still saw both Seattle and LA qualify for the play-offs as they finished fourth and third in the Western Conference respectively, but the Sounders will need to play a wildcard play-off.

The Houston Dynamo moved up to fourth in the east with a 2-1 win away to DC United, while the Vancouver Whitecaps completed their season with a 3-0 triumph over the Colorado Rapids.