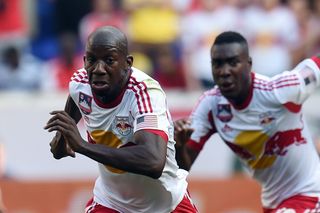 Wright-Phillips - the scoring leader in the United States' top tier - struck twice to move to 20 goals for the season, one more than Juan Pablo Angel's previous record of 19 for the Red Bulls from 2007.

Montreal led 1-0 at half-time at Red Bull Arena but a Thierry Henry brace, plus Wright-Phillips' double, saw the home side triumph, handing the Impact their eighth loss in nine MLS matches.

Dilly Duka scored the opening goal for the Impact in the 37th minute on the counter-attack but New York levelled seven minutes after half-time when Henry's diving header snuck inside the far post from Eric Alexander's cross.

The French veteran put the hosts in front in the 67th minute when Montreal goalkeeper Evan Bush failed to parry the former Arsenal striker's shot wide of the post, while Wright-Phillips got on the scoresheet eight minutes later, finishing sharply after being set up by Henry.

In a dramatic finish, the Impact dragged a goal back just four minutes later when Andres Romero struck from the edge of the box but Wright-Phillips capped off New York's win in stoppage time, converting from Peguy Luyindula's through ball.

The victory took the Red Bulls back into the play-off positions in the Eastern Conference standings with 31 points, one ahead of New England Revolution, who dropped to sixth, while Montreal (17) are bottom.

DC United (43) leapfrogged Sporting Kansas City (42) into first position in the East with a 3-0 victory in Kansas.

Sporting's recent frustrations at home continued with the reigning MLS champions having only won one of their past four games in front of their own fans.

DC struck three times in seven first-half minutes with Fabian Espindola, Chris Rolfe and Perry Kitchen scoring for the visitors from the capital.

The win was the Washington-based team's sixth in eight matches.

Welsh striker Robert Earnshaw struck on debut for Chicago as the Fire came from behind twice to draw 2-2 at Toronto FC, while Columbus Crew cruised past Houston Dynamo 3-0.