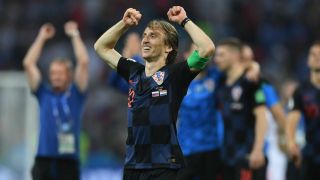 Croatia's run to their second World Cup semi-final has largely been inspired by the form of captain Luka Modric.

The Real Madrid star excelled for his club as they won a third Champions League in a row in 2017-18 and has continued to impress in Russia, helping his side to reach the last four for the first time since 1998.

The 32-year-old has been hailed by many onlookers as the best midfielder at the tournament and, consequently, the finest player in his position in the world. But is that a fair suggestion?

Using Opta data, we have compared Modric from last season and at the World Cup with four of the other leading central midfielders on the planet, all of whom play in the same multi-faceted role as the Croatia skipper: Kevin De Bruyne, Toni Kroos, Paul Pogba and David Silva.

It is probably not a huge surprise that, in terms of attacking numbers, De Bruyne and Silva were the pick of these players last season.

Pep Guardiola's dominant Manchester City side smashed records as they romped to the Premier League title, one of which was goals scored: they hit 106 in their 38 games.

Across all competitions, De Bruyne netted 12 of his side's goals, set up a further 21 and created a total of 139 chances, making him the clear winner in this category. Silva follows with 10 goals, 14 assists and 91 chances created.

5 – The top players in terms of open play goal sequence involvement (involvement in the build up to an open play goal) this season in the Premier League:46 – Kevin De Bruyne44 – Mohamed Salah37 – Raheem Sterling34 – David Silva31 – Harry Kane/FernandinhoFrequent. May 15, 2018

Modric and Kroos leap to the top of the leaderboard when it comes to passing, though.

Modric's passing accuracy last season was at 90 per cent in all competitions, higher than that of De Bruyne (83), Silva (89) and Pogba (85). Kroos is top of the pile on a hugely impressive 93.

Madrid's duo also posted the highest accuracy of passes ending in the attacking third of the pitch, with Kroos on 88 per cent and Modric on 84. De Bruyne was the lowest, on 75.

None of these players are allowed to neglect the defensive side of their game, which is reflected in some seriously strong statistics.

However, the former Tottenham man has a clear edge in interceptions. He managed 55 for Madrid in 2017-18, 12 more than nearest competitor De Bruyne and far above Silva and Pogba (26) and Kroos (23).

WHAT ABOUT THE WORLD CUP?

Modric has two goals and one assist in Russia, putting him top of the pile (De Bruyne is nearest with one goal and an assist). He has also created 14 chances, bettered only by De Bruyne on 16.

Passing-wise, his accuracy rate of 86 per cent puts him above De Bruyne (81) and Pogba (78), but behind Silva (87) and Kroos (93). He is also third in our standings for passing accuracy in the final third.

On the defensive side of things, Modric has won 35 duels, which is bettered only by Pogba (39). And, although he is behind Pogba and Kroos for tackles won, he has made at least three more interceptions than any of the other players in this list.

All things considered, it is hard to argue against Modric being the most effective all-round midfielder at the World Cup, and perhaps the world.