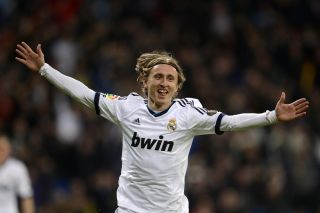 The Croatia international joined the club from Tottenham in 2012 and clinched the Supercopa de Espana in his first season at Santiago Bernabeu.

With Modric now committed to Real until 2018, the 28-year-old hopes more success will follow, starting with the Supercopa second leg against Atletico Madrid on Friday, with the tie level at 1-1.

"When I arrived here two years ago, we won the Supercopa de Espana," he told Real's official website.

"It was my first match. Hopefully we can win another Supercopa in Atletico's ground. I'm feeling really confident and it would be very significant to start the season by winning another title after the European Super Cup.

"We're going to give our all to bring more satisfaction to the club.

"When I came to Real Madrid, all my dreams came true. These years have been magnificent, I have enjoyed every moment and I've had fun.

"In the coming years I'm going to give even more. My dream continues with my renewal. I hope we can win many more titles in the years to come.

"From the first moment I felt affection from the stands. I can only say thank you very much to the supporters. I am going to give my best in every match so that they feel proud of me."