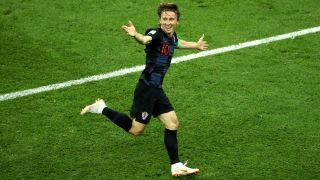 Former Dinamo Zagreb coach Branko Ivankovic knew a long time ago Luka Modric would be among the world's best, recalling being laughed at when talking up the Croatia star.

Modric, 32, played under Ivankovic's guidance at Dinamo for just over a year before earning his move to Premier League club Tottenham.

Prior to a Champions League qualifier against Werder Bremen in 2007, Ivankovic told reporters that Modric – then 21 – was better than Diego, the former Brazil international whose career includes stints at Juventus and Atletico Madrid.

Ivankovic remembered his statement drawing chuckles, but Modric has since gone on to star for Croatia and Real Madrid, winning four Champions League titles with the Spanish giants.

"I am very proud to be able to say that I have coached Luka Modric in Dinamo," he told Omnisport.

"Even back then I have already said that he will be one of the best players in the world. I compared him to Diego, or even better.

"When I first said it, many people laughed but it was very obvious that this will be the truth."

Modric has helped Croatia into the World Cup quarter-finals, where they will face hosts Russia in Sochi on Saturday.

Ivankovic, an assistant coach when Croatia sensationally reached the semi-finals at France 98 who is now in charge of Iranian giants Persepolis, said Modric's hunger to improve was obvious.

"It was clear that he has pure energy, passion and what differentiated him the most from other players is that he thrives to become better and better each day no matter his age or where he plays or anything else," he said.