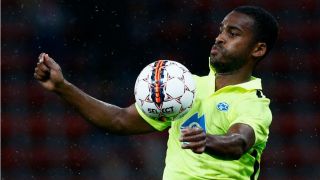 Ola Kamara is aiming to help Molde to a Europa League victory over Celtic and enjoy bragging rights over Ronny Deila and Stefan Johansen.

The Tippeligaen side and their Scottish Premiership opponents are unbeaten after the first two matches of the round robin stage, Molde winning at Fenerbahce and drawing with Ajax while Celtic have played out back-to-back 2-2 draws.

Norway international Kamara played under Celtic manager Deila for four seasons at Stromsgodset, where he collected the Tippeligaen title alongside current Parkhead midfielder Johansen in 2013.

And the 26-year-old says going head-to-head with a pair of former colleagues will act as added incentive for the clash at the Aker Stadion.

"There will be extra motivation for the guys when Stefan comes," Kamara told Herald Scotland. "We don't want him to come home and do well.

"We know he is a great player so we need to try and take him out of the game. It will be the same for Nir Bitton.

"For the people of Norway this game is bigger than our first two matches with Ajax and Fenerbahce.

"In the media we always write about how Ronny and Stefan are doing in Scotland.

"Everybody is aware how well they are doing and how Celtic are doing so that's why this is such an important game.

"I will catch up with both of them them after the game and hopefully I will be the one with a smile on my face.

Celtic's Champions League ambitions this season came to an end against Swedish side Malmo but, ahead of their latest trip to Scandinavia, Johansen remains confident that his side are a cut above teams from his homeland due to a higher standard of domestic competition.

"There is a reason why I went from Norway to Scotland," he told the Romsdals Budstikke.

"Celtic are a better team than Molde and the Scottish league is in my eyes a notch up from the Tippeligaen.

"At the same time, I see that teams such as Molde, Rosenborg, Valerenga and Stromsgodset could certainly do well in the Scottish league."

Celtic and Molde are two of the 10 domestic league champions contesting the group stages of this season's Europa League and Deila's men will be keen to improve their defensive record in continental competitions.

The 2-2 draws with Ajax and Fenerbahce mean they have conceded twice in each of their past four European games – something Croatian defender Jozo Simunovic could help to remedy as he targets a return to fitness from bone bruising.

Striker Leigh Griffiths could start for Celtic after featuring for the final half an hour in the weekend win over Motherwell.

Aside from long-term absentee Joshua Gatt, Molde coach Erling Moe has a full squad to choose from.