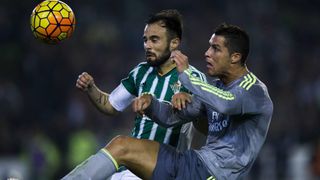 Ronaldo appeared to kick out at Molinero ten minutes into the second-half as Betis held a 1-0 lead at the Estadio Benito Villamarin.

Alvaro Cejudo opened the scoring in stunning fashion after just seven minutes, but Madrid managed to find an equaliser through Karim Benzema with less than twenty minutes remaining.

Molinero was not happy with the actions of his compatriot, and said if the referee had seen the incident he would have been reprimanded.

"It was an ugly gesture by Ronaldo to kick out with his leg," Molinero told Canal Plus.

"If the referee sees it, it's an act of aggression.

"I also give out fouls, I am not a saint, but the ball has to be there. Without the ball it is undue."

The 30-year-old was happy with the result despite conceding the lead late in the game.

"We defended as well as we could," he said. "To take a point from this team is very good.

"We have to keep going with this mentality."

Betis are 14th in La Liga, four points above the relegation zone.