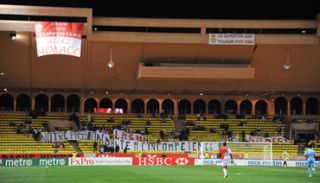 Fireworks were set off during Monaco's last home game against Le Mans before fans invaded the pitch after the final whistle. During the melee, the referee was struck by a fan, according to the match officials report.

"Regarding the seriousness of the facts, Monaco are condemned to one match behind closed doors and a three-point penalty, including one suspended, for the next Ligue 1 season," the LFP said in a statement.

Big-spending Monaco, owned by Russian billionaire Dmitry Rybolovlev, are widely expected to be the main challengers to champions Paris Saint-Germain in the title race next season.