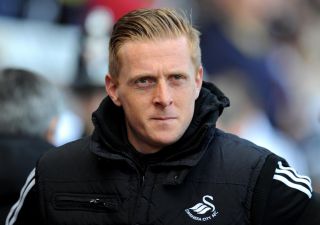 The Spain international has started just three Premier League games since December after struggling with an ankle injury and, although close to a return, Monk says he will not be fit in time to face Aston Villa on Saturday.

Michu scored 22 goals last term after joining from Rayo Vallecano, but has found the net just six times this time in an injury-hit campaign.

"He's nearly there, but he just can't seem to get that swelling down," Monk said.

"He is going to see the national doctor in Spain, so we will know more after today (Thursday).

"I'm still hopeful that he will be able to play a part in the remainder of our season, but we have to be careful because it's important he gets the rest and comes back as strong as ever.

"Michu is a big player for us. He scores a lot of goals and is a quality striker.

"We're all disappointed for him, but he will be back fit and strong."

Monk is predicting a tough match against Villa and was adamant his side will not be resting easy after last week's 2-1 win at Newcastle United lifted them six points above the relegation zone.

Villa are a point below Swansea in 15th and have not lost in their last five matches.

"It won't be easy for us. No game is easy, especially at this time of the season," he added.

"Like us, Aston Villa are scrapping to secure their safety. They are a young side and are very energetic.

"We are expecting a really though game, and we can't take anything for granted.

"If we go into these next three games and don't get any other points while other teams win, we could be relegated.

"It's far from over for us. We have to go into Saturday's game to fight for three points. We have to make sure we are mathematically safe."