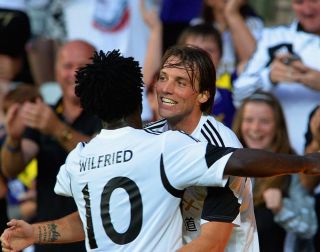 That has meant the onus has fallen on club-record signing Bony to provide the goals at the Liberty Stadium, and he has duly responded with 24 across all competitions.

Bony's latest contribution came with a brace in Saturday's 4-1 rout of Aston Villa, a win that all but secures Premier League safety for the south Wales club.

Monk stated that Bony is now looking to continue that form into Ivory Coast's FIFA World Cup campaign, while expressing regret that the club's leading marksmen have not had more time on the pitch together.

"He's (Bony) got two more games to score some more, which I know he'll want to be doing," he said.

"He's already talked about taking it into the World Cup and hitting the ground running there, but it's been difficult with the season Michu's had - being in and out of the squad with niggly injuries - and Bony's stepped up to the plate.

"It's a shame we haven't seen more of the pair of them together. A fully fit Michu and a fully fit Bony would be a handful for any defence.

"It's not just his goals, it's the way he is. He's a great character around the boys, he's a leader, he works hard and leads the team like that."

Bony's form has led to rumours of a close-season exit, with Manchester United reported be among the club's interested in his signature.

Rather than be frustrated with the speculation, Monk believes it bodes well as it proves Bony is in good form for Swansea.

He added: "I don't worry (about transfer speculation), that can only be a good thing. That means he's doing something right for us.

"It's all speculation. At the end of the day, he's a Swansea player, he's a player that Swansea want here for the future.

"We're not a selling club, we don't need to sell, we're in a very healthy position and that's the way we'll deal with it as always."