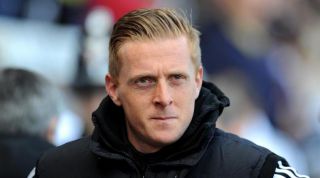 Goals from Jonjo Shelvey, Pablo Hernandez and a Wilfried Bony penalty put Aston Villa to the sword in a 4-1 Premier League victory on Saturday, after Gabriel Agbonlahor had cancelled out Bony's earlier strike.

Swansea's first consecutive league wins since December 2012 leave them eight points clear of the relegation zone - only Sunderland, who are 10 points behind with four games to play, can catch them - and Monk is keen to know whether he has a future in his role after replacing Michael Laudrup earlier this season.

"The mission I was given was to get the club safe," he said. "We're still not mathematically, but I'd be very surprised if what we've got wasn't good enough.

"I'll have to speak to the chairman and the board, hopefully very soon, and just clarify exactly what their thoughts are for the future.

"I think that's for the good of the club, the players, myself, the fans, for everyone.

"And I'm sure the chairman thinks like that himself."

Shelvey's goal was a sublime strike from the edge of the centre circle, and Monk revealed the midfielder had awarded himself goal of the season upon his return to the changing rooms.

"He's got that in the locker," he continued. "He came in shouting 'goal of the season' to be fair.

"People have been talking about his potential for years but you forget he's only 21 (Shelvey turned 22 in February).

"He does it in training and he tries it, and he's got that technique in the locker.

"Today, you could see his intentions straight away. It's not a fluke, you can see what he's trying to do and he gave the keeper no chance.

"At that moment in the game as well where I thought Villa were pushing us back, I thought something like that could change it, which it did."

Monk stopped short of tipping Shelvey for late call-up to England's World Cup squad, adding: "If it's not now, it should be later if he carries on progressing the way he should be as a player."