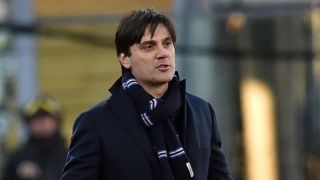 Vincenzo Montella insists that he did not betray Sampdoria by taking over as AC Milan head coach.

Montella spent just one season at the helm of Samp before opting to become the latest man to try and restore Milan's past glories.

The former Italy international says that the opportunity at San Siro was too good to pass up, but is adamant he retains strong ties to Sampdoria.

"I worked for Sampdoria until the last day and I still have a great relationship with them," he said at his first news conference as Milan coach.

"I had written permission from the club to talk to Milan. I apologise to the fans if they think that I am a traitor. I always gave my all for Sampdoria, I have a special relationship [with the club]."

Montella had also been tipped to replace Antonio Conte as Italy coach before Giampiero Ventura was chosen as the next man to lead the Azzurri.

And Montella says the links were nothing more than paper talk.

"I came back from holiday on June 20 and heard of Milan's interest," he added. "The national team [speculation] was just rumours."