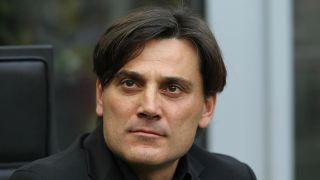 Vincenzo Montella has described himself as a "victim" and believes he deserved more time at AC Milan.

The 44-year-old was dismissed as head coach by the Rossoneri in November after a below-par start to the season, which had seen them fall 18 points behind then Serie A leaders Napoli.

Milan had finished sixth in the previous campaign, but although the club made 11 major signings in the transfer window, including Leonardo Bonucci, Andre Silva and Andrea Conti, results were poor.

Montella has now spoken out and believes he was unfairly treated by the Italian giants.

Speaking to Gazzetta dello Sport, he said: "Am I a victim? Definitely.

"My sacking? Of course, it was bad. A project had started and was interrupted in the wrong way.

"There was a change of owners and a revolution in the dressing room.

"We signed more than 10 players with many different nationalities, only one of whom had a history of playing in the Champions League [Bonucci].

"The club weren't patient. I think I deserved a bit more time."

Montella was appointed Sevilla manager just over a month after his departure from the San Siro, but was dismissed in April after a nine-match winless run.