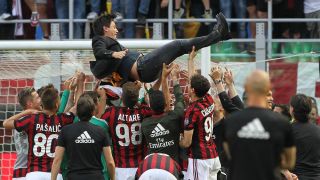 Vincenzo Montella believes a "new beginning" is underway at AC Milan after they qualified for the Europa League thanks to a 3-0 beating of Bologna.

Milan have not played European football since the 2013-14 campaign after finishing eighth, 10th and seventh in the previous three Serie A seasons.

However, their victory at San Siro, secured via second-half goals from Gerard Deulofeu, Keisuke Honda and Gianluca Lapadula, saw the Rossoneri guarantee sixth this season with a match to spare and a place in Europe's secondary competition next term.

Head coach Montella recognises that there is still plenty of work ahead, but is sure Milan are on the right track to returning to the upper echelons of domestic and European football.

"I think it has been a positive season," Montella told reporters.

"We could have done better, but this is a new beginning. Now we have to work to aim a bit higher. I am really happy for this group and I am really proud of being their coach.

"It was not easy to create a group that gives everything they have, every game.

"In the first half, we showed the right attitude but did not manage to make our chances count. I had to change something. The boys did well to put into action what I asked them.

"This is my hundredth win in Serie A, it has a special taste, for AC Milan, for the new ownership and for myself. It was not easy."