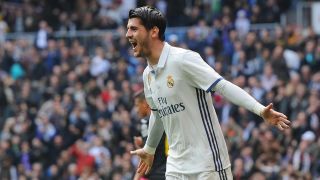 Morata is among the Rossoneri's key transfer targets as they seek to build on this season's sixth-placed finish in Serie, during which they struggled in front of goal.

Milan scored just 57 goals in 38 league games and Montella feels Morata could be the answer to their problems in attack.

"I provide the team with the basics and then some could offer more than others.

"Morata is someone who would give you a lot of options.

"Our finishing has not been at the same level as the football we showed. So we have to do more in front of goal.

"We already know what we want in the transfer market, but so do other teams."

The 24-year-old Morata has a contract with Madrid until June 2021.

He has scored 20 goals in 42 appearances in all competitions this season.