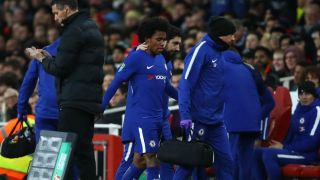 Chelsea will be without injured trio Alvaro Morata, Thibaut Courtois and Willian for the visit of Newcastle United in the FA Cup on Sunday, coach Antonio Conte has confirmed.

But Conte will be without the services of three key men when they welcome Newcastle, as Morata continues to struggle with a back injury and an ankle problem keeps Courtois on the sidelines.

Willian has now been added to that list after picking up a hamstring problem against Arsenal and he is due for a scan, though Conte suspects it to be a minor issue.

Speaking at this pre-match news conference, Conte said: "Morata, Courtois are out. I don't know [how close they are to returning]. It's very difficult to tell today, only that they need to come back.

"Morata has this back problem and Courtois, he took a kick on his ankle. Willian is out. He will have a scan to evaluate his injury, but I don't think it's a serious injury.

"But Cesc Fabregas trained today [Friday] and tomorrow I will check his physical condition. This is good news for us."

The forced withdrawal of Willian against Arsenal allowed Ross Barkley to make his Chelsea debut from the bench following his £15million move from Everton.

Although Conte accepts Barkley still is not as sharp as he could be, he might need to rush the England international's comeback from a hamstring injury due to Willian's absence, hinting at a first start.

"But if we want to accelerate this process then he needs to play, especially in this situation with injuries to players like Willian. We don't have many options."

Despite bemoaning an apparent lack of options, Conte insists he is content with the club's transfer policy.

"I am happy to work with my players, to work for this club and I'm happy to try every day to give everything for this job," he said.