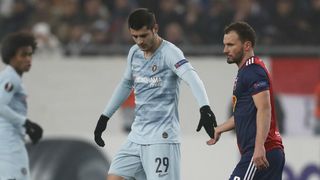 Morata was forced off in first-half stoppage time at the Groupama Arena, having gone down innocuously clutching his left knee.

Olivier Giroud replaced the stricken forward, and ultimately clinched a share of the spoils for Chelsea when he curled in a 75th-minute free-kick after Ethan Ampadu's own goal and a Loic Nego strike had cancelled out Willian's opener.

But Sarri was quick to play down the seriousness of Morata's injury, although he confirmed Chelsea will not know the full extent of the damage until Friday.

"No, the first impression of the doctor is that it isn't too bad, not serious," Sarri told a news conference.

"But of course with this situation we have to wait and wait until tomorrow I think to see if the situation is serious."

2 - Chelsea were the first side to score two direct free kick goals in a single Europa League game since Liverpool against Zenit St Petersburg back in February 2013. Rarity. December 13, 2018

With Sarri having opened the door for club captain Gary Cahill to leave in January, Ampadu was handed the chance to impress alongside Andreas Christensen.

And despite the youngster's own goal, Sarri insisted he was impressed by Ampadu's display.

"The own goal is not the fault of Ampadu," Sarri added.

"We were zonal marking. When an opponent touches a ball in advance with the first of a zone it is really a very big problem.

"I think he played a very good match, especially in a team like this. We need to consider if you play Ampadu only in the usual team it is easier for him.

"We changed 10 players, so it is not easy with the young players to play with a new team in one of these matches, I am really very happy with Ampadu."