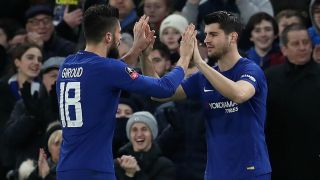 Alvaro Morata will replace Olivier Giroud for Chelsea's clash with PAOK in the Europa League as Maurizio Sarri adopts a rotation policy with his strikers.

Giroud earned his first Premier League start of the season at the weekend and impressed in the 4-1 victory over Cardiff City.

The France striker, buoyed by the recent end of his international goal drought, twice assisted hat-trick hero Eden Hazard, who afterwards described his team-mate as the best target man in the world.

But the encouraging performance will not be enough to keep him in the team on Thursday with Sarri preferring to determine the position on a game-by-game basis.

"On Saturday Oliver played very well. Without scoring but he was very useful for his team-mates," the Blues boss said.

"In the last two weeks I have seen four matches of Cardiff and four matches of PAOK and I thought Giroud was more suitable for the Cardiff match and Morata for the other.

"So I don't know who will be the striker of the future but I think both because we have to play 60 matches.

"In characteristics they are different and it depends on the kind of match."

Hazard could also be excused from the midweek trip to Greece in order to save his sensational form for domestic matters.

The Belgium star boasts seven goals in his last five appearances for club and country.

"Of course either Hazard or Pedro will rest on Thursday."