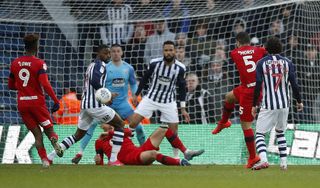 Wigan continued their revival by pulling off a shock 1-0 win at Sky Bet Championship leaders West Brom to boost their survival chances.

Captain Sam Morsy, born in nearby Wolverhampton, scored in the 73rd minute to give Paul Cook’s side their third successive victory and make it 17 points out of the last 24 available.

The Latics had the better chances, Gavin Massey heading against the outside of the post and Gary Roberts and Jamal Lowe denied in one-on-ones with goalkeeper Sam Johnstone.

Wigan created the first chance when Morsy’s shot following a corner was spilled by Johnstone, who then held the follow-up from Joe Williams.

Rekeem Harper helped the ball on to leave the Brazilian playmaker in the clear – but his toe-poked shot was blocked by Marshall’s legs.

In an open game, Wigan went close twice in quick succession, with both chances falling to Massey.

First the winger sent a diving header against the outside of the post from Kieffer Moore’s cross, then he turned Dara O’Shea from Tom Pearce’s throw-in and whistled a low drive a couple of feet wide.

Albion were forced into a change two minutes before half-time as centre-back Ahmed Hegazi was forced off with what appeared to be a hamstring problem. Kyle Bartley replaced him.

Wigan created the first opening of the second half when Roberts dispossessed Krovinovic deep in the visitors’ half.

The loose ball ran to Jamal Lowe, who was allowed to run some 50 yards before blazing high and wide.

There were penalty shouts at both ends, but referee Tony Harrington was unmoved.

First a challenge by Leon Balogun on Hal Robson-Kanu, who had been put through by substitute Matt Phillips, had the home fans appealing.

Then Wigan though they should have had a spot-kick for handball against Conor Townsend.

Wigan continued to press and Roberts forced Johnstone to block at his near post after the forward let fly from point-blank range when Morsy put him in after a corner.

Krovinovic was a whisker away with a 25-yard drive but Wigan returned to the attack to take the lead.

From Michael Jacobs’ corner; Moore missed his connection, Krovinovic’s attempted clearance looped up in the air, Cedric Kipre’s hooked effort was blocked and Morsy rammed the loose ball into the top corner from 10 yards.

As Albion piled forward for an equaliser, Wigan almost doubled their lead in time added on but Lowe was denied in a one-on-one with Johnstone.